Lifelong water lover and climber Noah Kane pushed himself harder and farther to reach new heights when he attempted a climb El Toro in Northen Mexico. See how he faced the toughest challenge of his life. 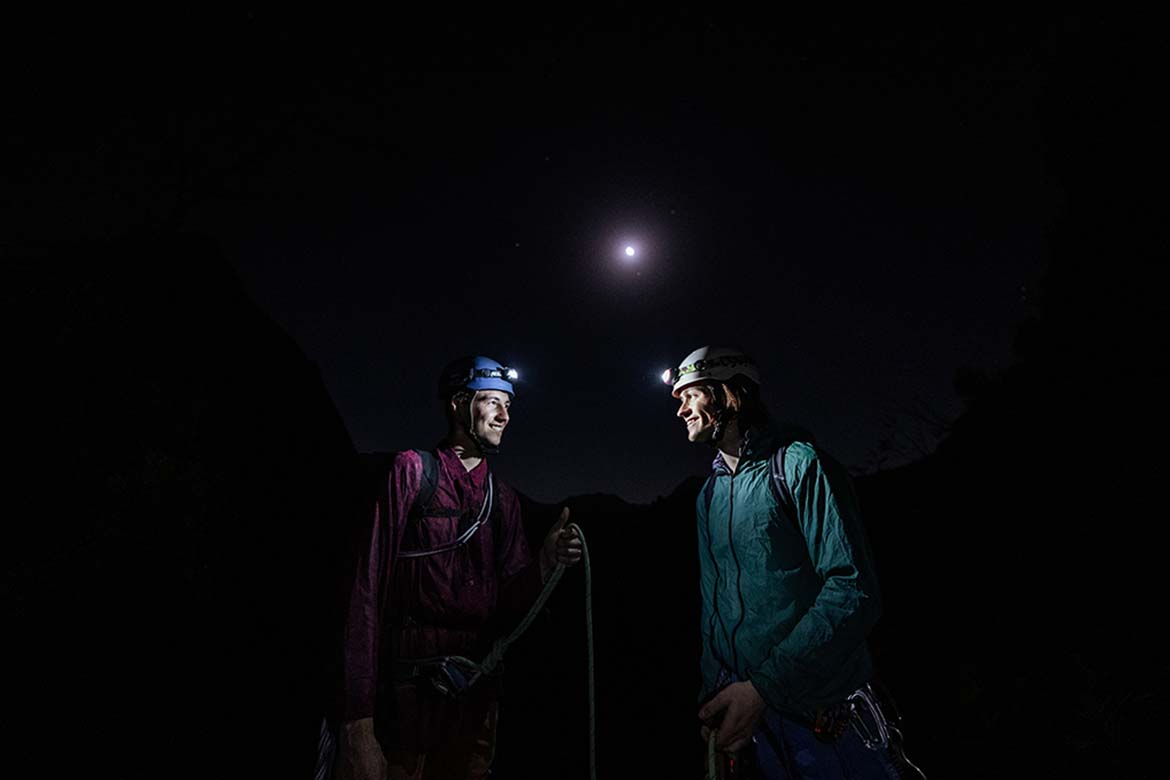 This photo was taken at 3:26 a.m on a calm and quiet morning in the northern Mexico desert. Jaidon, and I are about to embark on the biggest and hardest rock climb that either of us have ever attempted. The idea is to complete the climb in a day, but we have 2,300 feet of vertical rock between us and the summit, which explains why we’re up so god damned early. What I love about big climbing adventures like this is that despite feeling all of our individual emotions of doubt and fear, we feel a shared strength; no matter what we face up there, we will face it together. 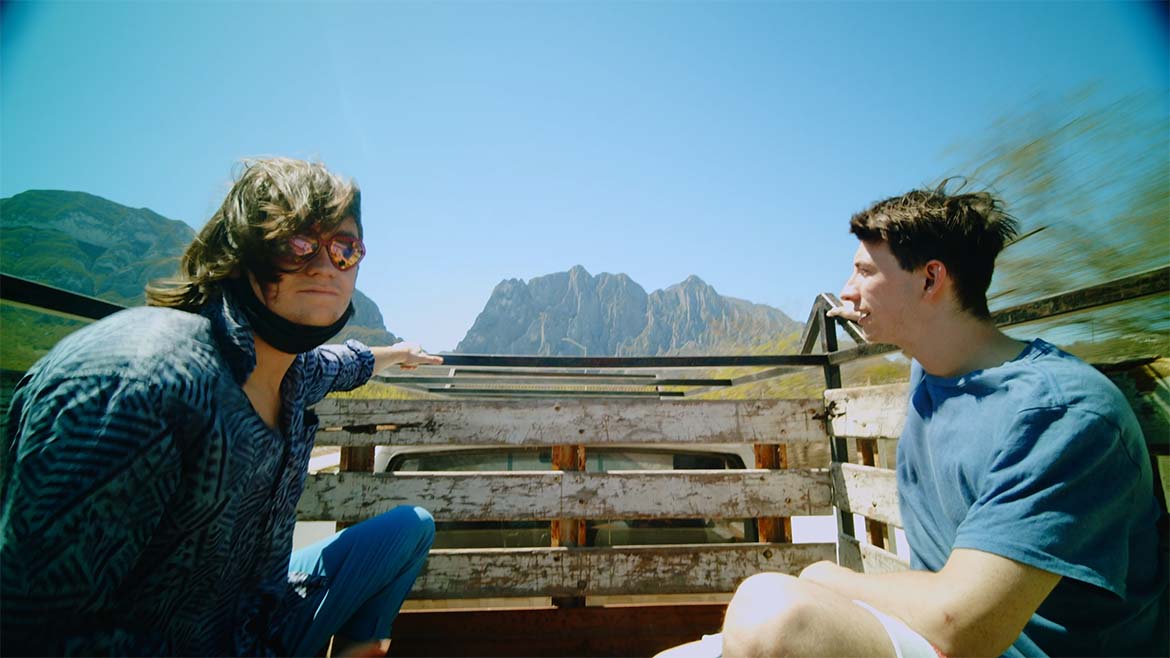 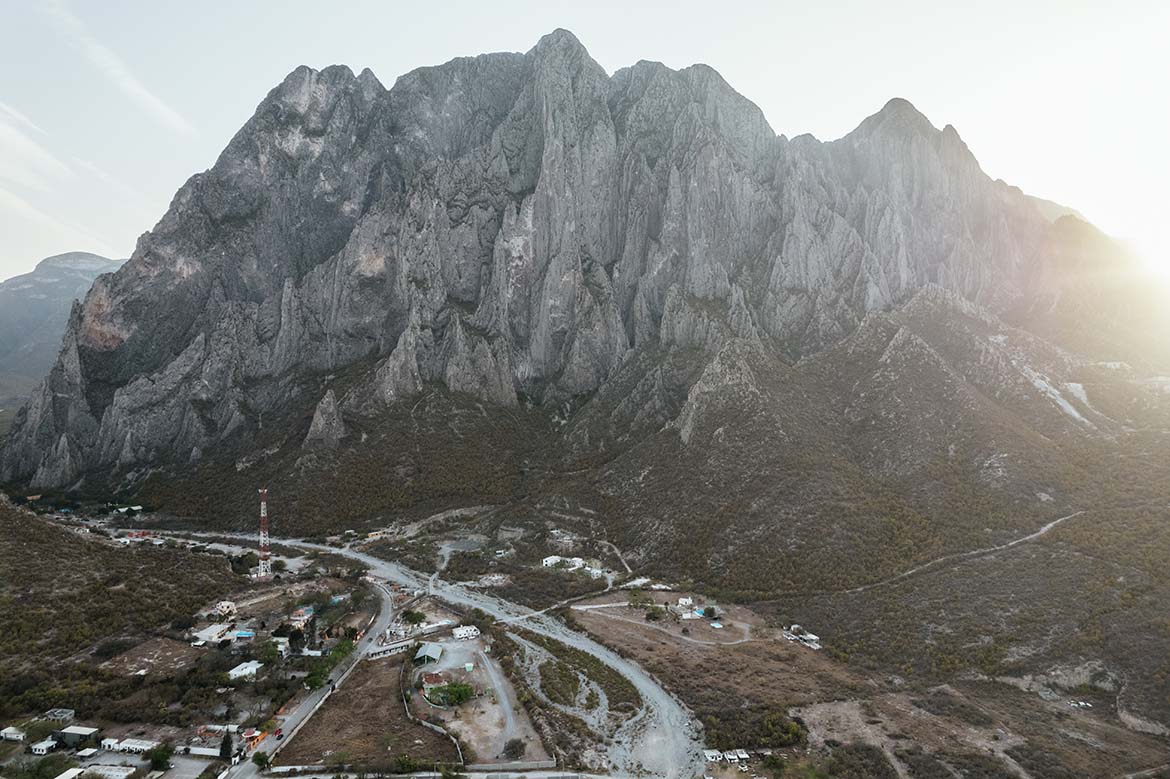 El Toro. You could call it awe-inspiring, striking, or even beautiful, but you have to admit; you would never call it “easy” - nothing about El Toro looks friendly or relaxing whatsoever. I’ve never been so intimidated by a piece of a rock. El Toro and the surrounding mountains here form an enclosure with the riverbed as the only flat way in and out. This ring of mountains is the perfect natural fencing and is what gave this world famous climbing area the name: “El Potrero Chico”, or “The Little Corral” 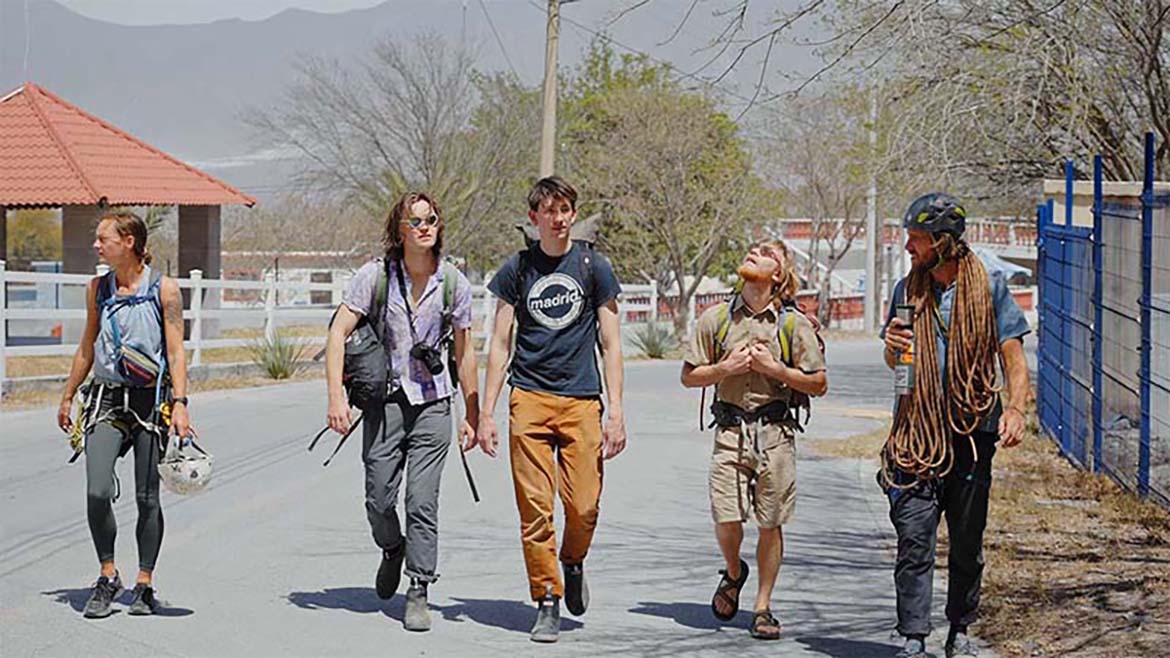 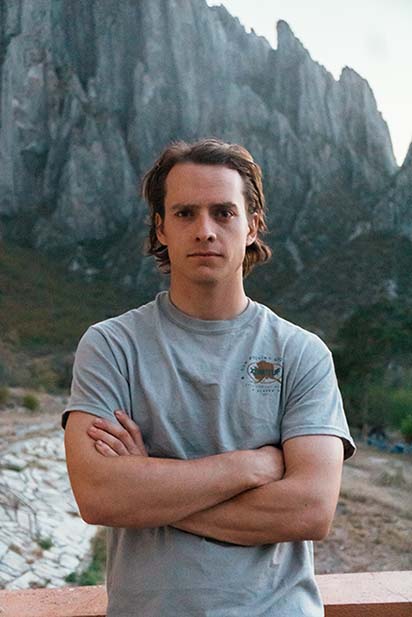 My longtime climbing partner Jaidon and I came here with the objective of climbing a massive and intimidating route called Time Wave Zero. It’s a 2,300 foot bolted climb with a difficulty grade of 5.12a (very hard), and it is the second longest sport climb in North America. The very thought of the climb has made my palms sweat for weeks. 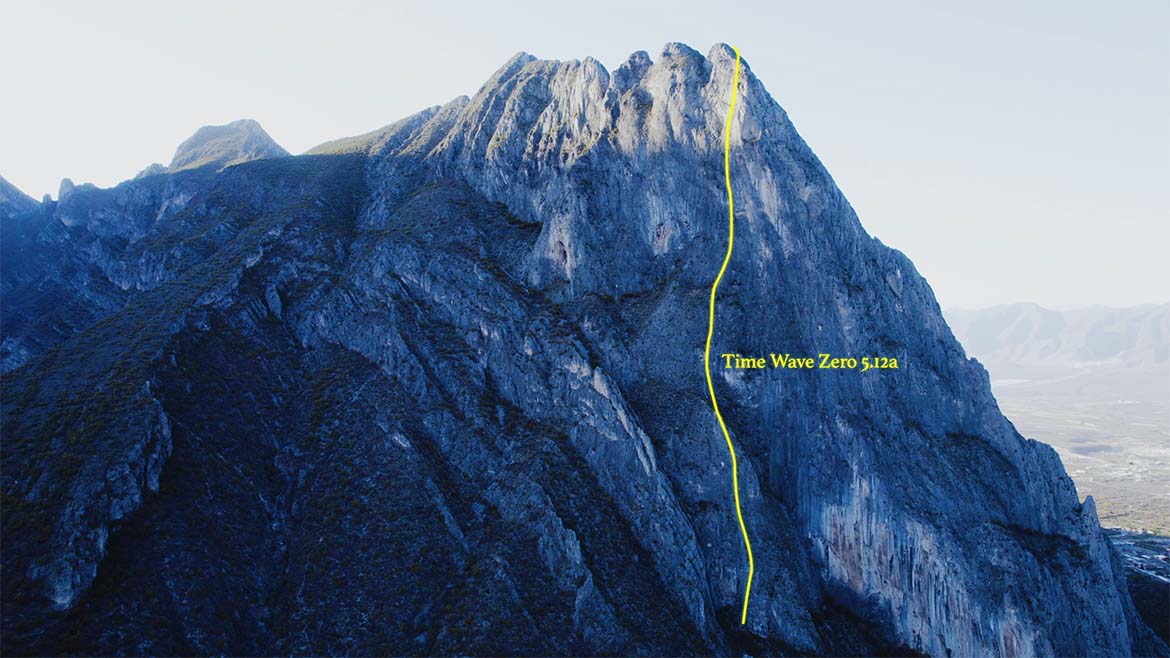 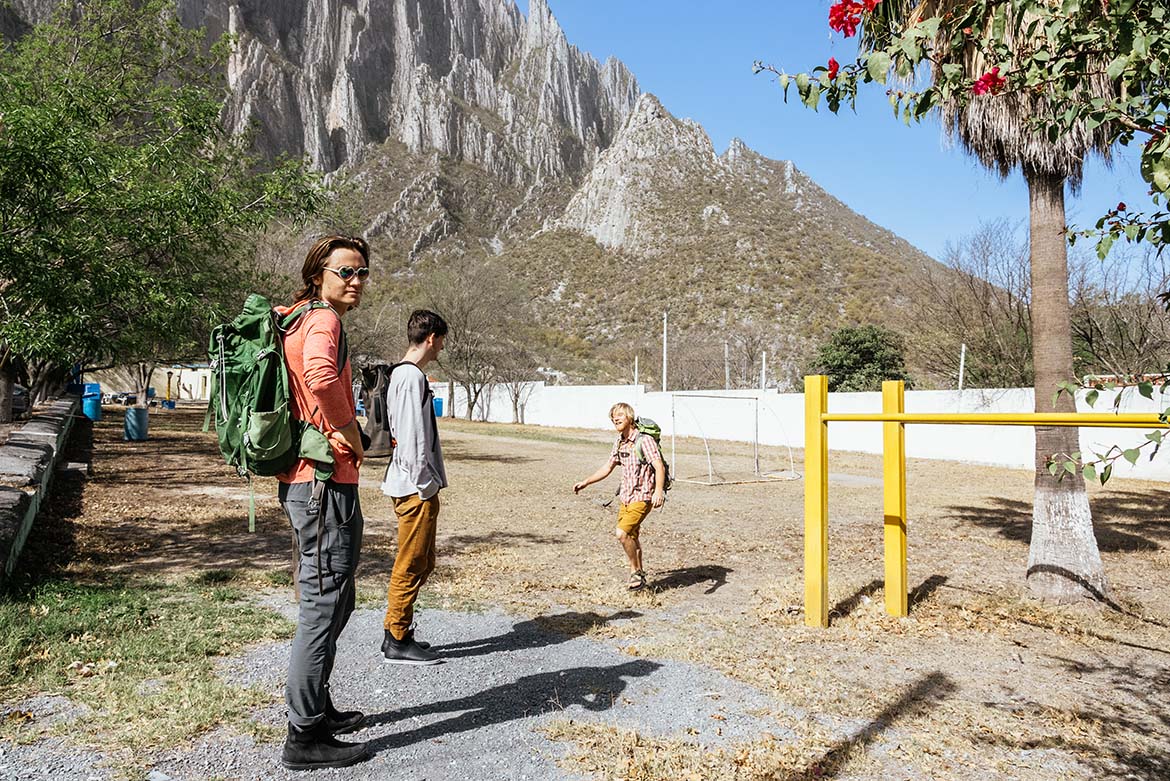 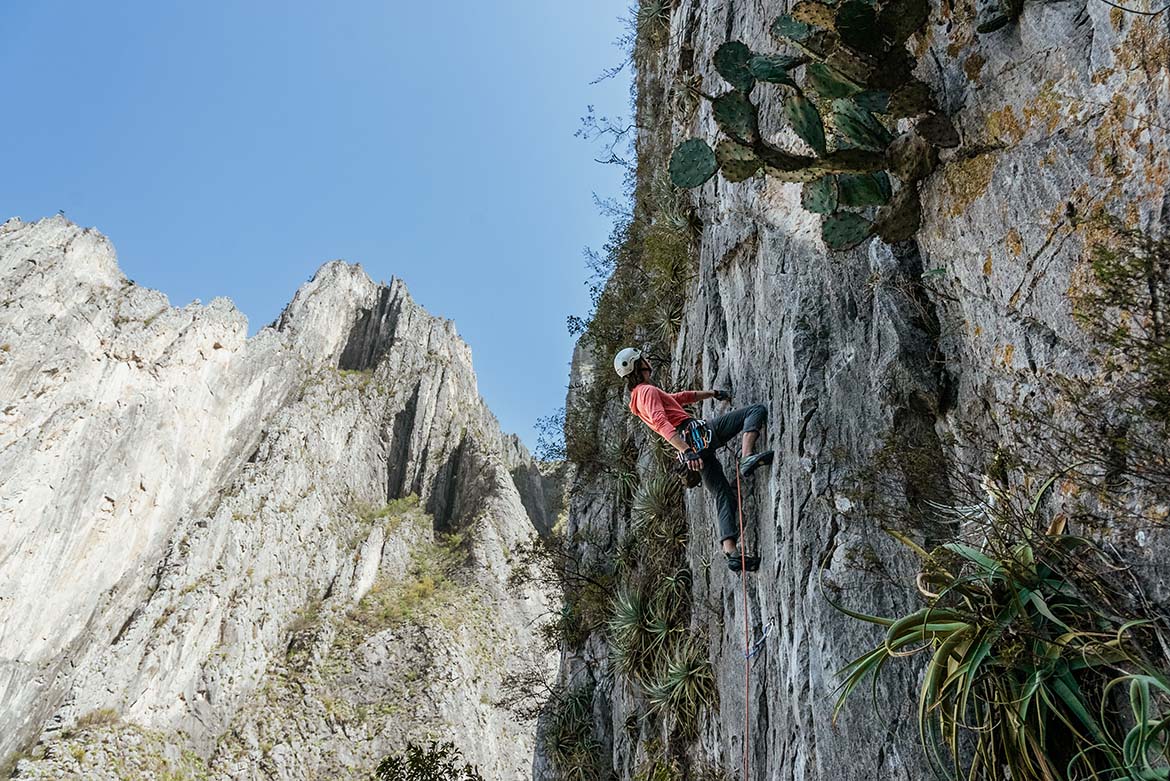 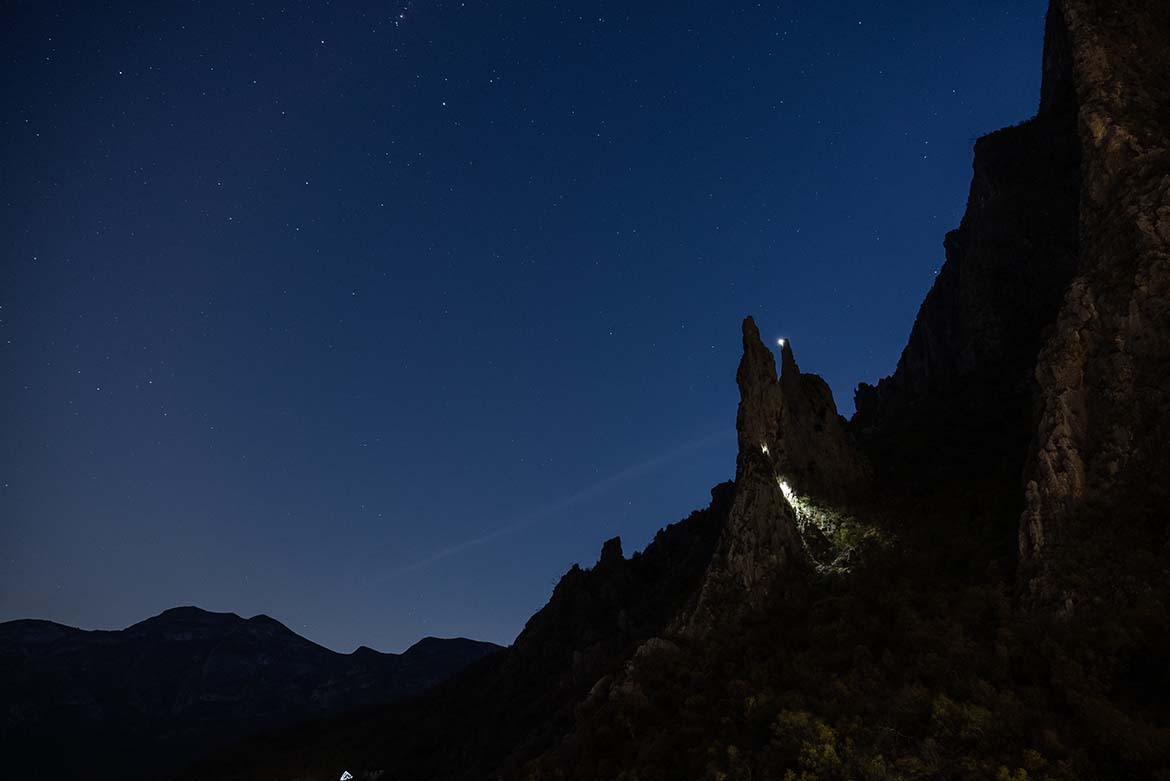 After a week spent flailing on hard routes, getting spooked handling gear hundreds of feet up, and climbing sketchy spires in the dark with violent wind trying to knock us off, we finally felt ready to climb Time Wave Zero.

We woke up at 2 a.m. to get as early a start as possible. The night before we even set out bowls of cereal and cups of coffee to consume as soon as we awoke. The coffee served both the function of waking us up, and the function of getting everything moving so that hopefully we wouldn’t have to worry about…certain aspects of biology on the wall. 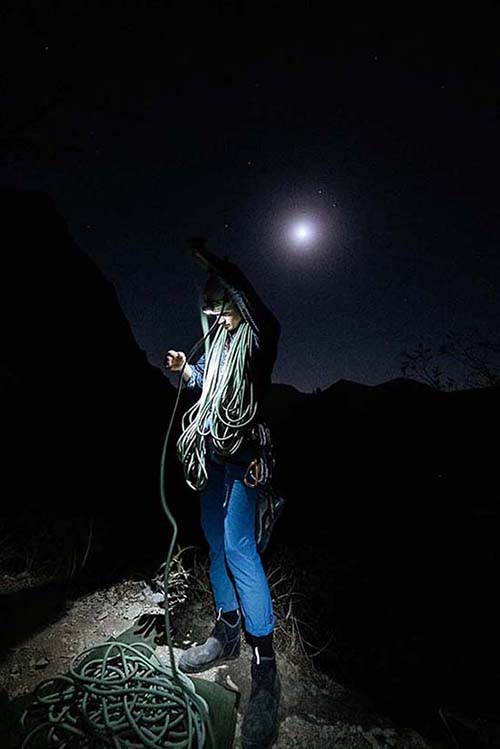 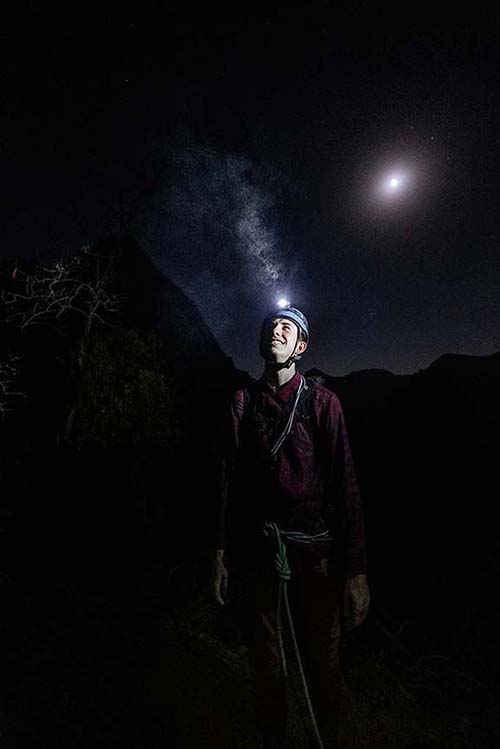 We made amazing time for the first half; reaching the top of pitch 12, a halfway milestone with a big comfortable ledge, in about five hours. It was on this ledge that things started to fall apart. For Jaidon, the coffee hadn’t worked as well as we had hoped. He will forever be indebted to me for having the foresight the night before to say “maybe let's bring this tortilla bag… just in case”. 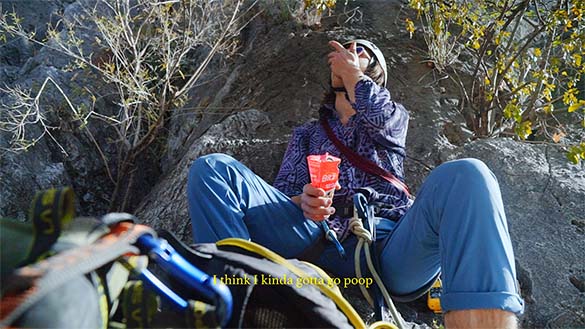 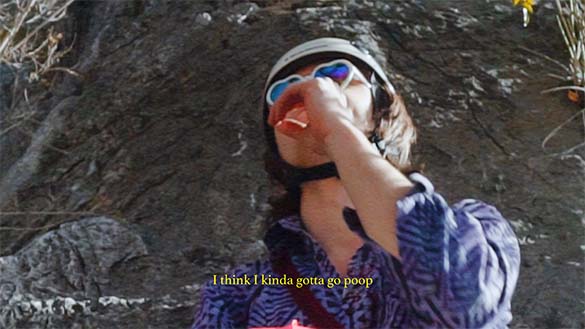 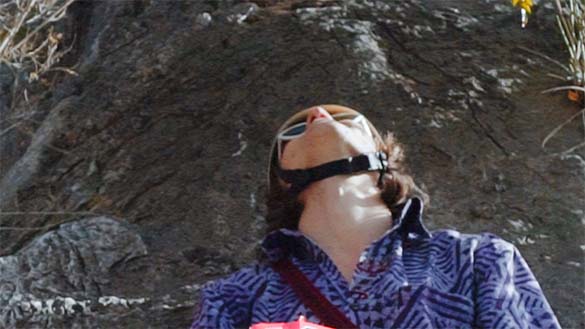 After this little slow down, we looked up at the massive headwall above us. This remaining 1000 feet of climbing held the hardest and most vertical climbing on the route, and we climbed it all in the hot sun. 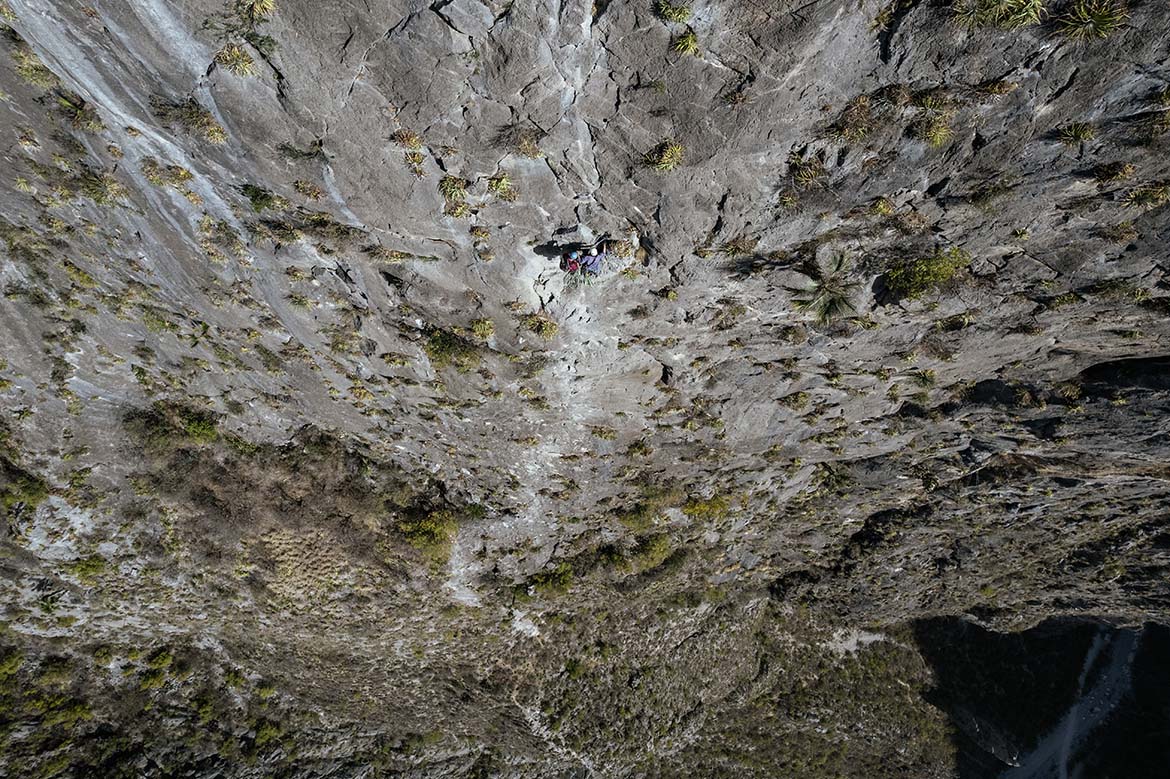 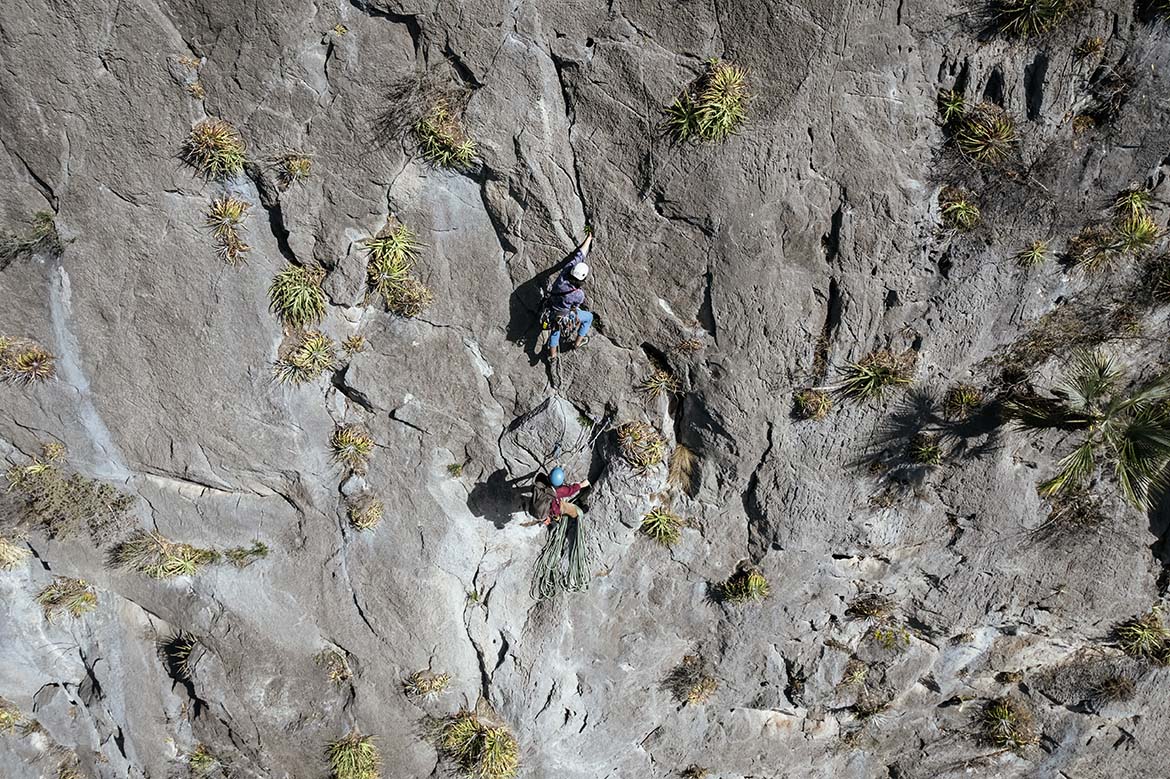 Hard climbing turned into harder climbing as we slowly inched our way up. At around 3:30 p.m we reached the start of the hardest pitch, 100 feet below the summit. At this point I had lost any semblance of positivity. We barely had any water left, I felt dehydrated and sunburnt, and I was about to attempt one of the hardest difficulty grades I had ever climbed. There was only one emotion that was going to get me to the top of this mountain: anger.

The climbing got really hard and I fell a couple times on a tricky move. At this point all I cared about was getting to the top, so I pulled on closely placed bolts through the hardest 10 foot section. When the bolts became more spaced out, I power screamed through tricky overhanging moves until I finally gained easier ground. All day I had been worried whether this pitch would shut us down, but at this moment, when I made it to the top anchors, I knew that we had done it. 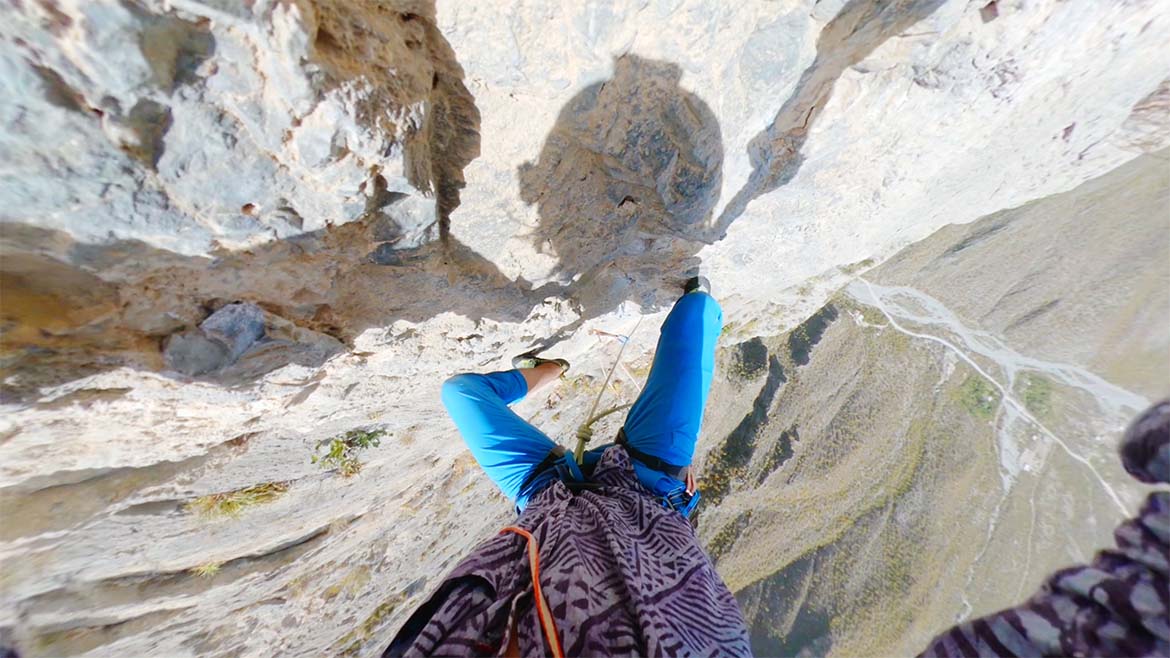 As soon as we got to the top I pulled out my camera to get a shot of Jaidon; I’ve never seen the guy look worse. 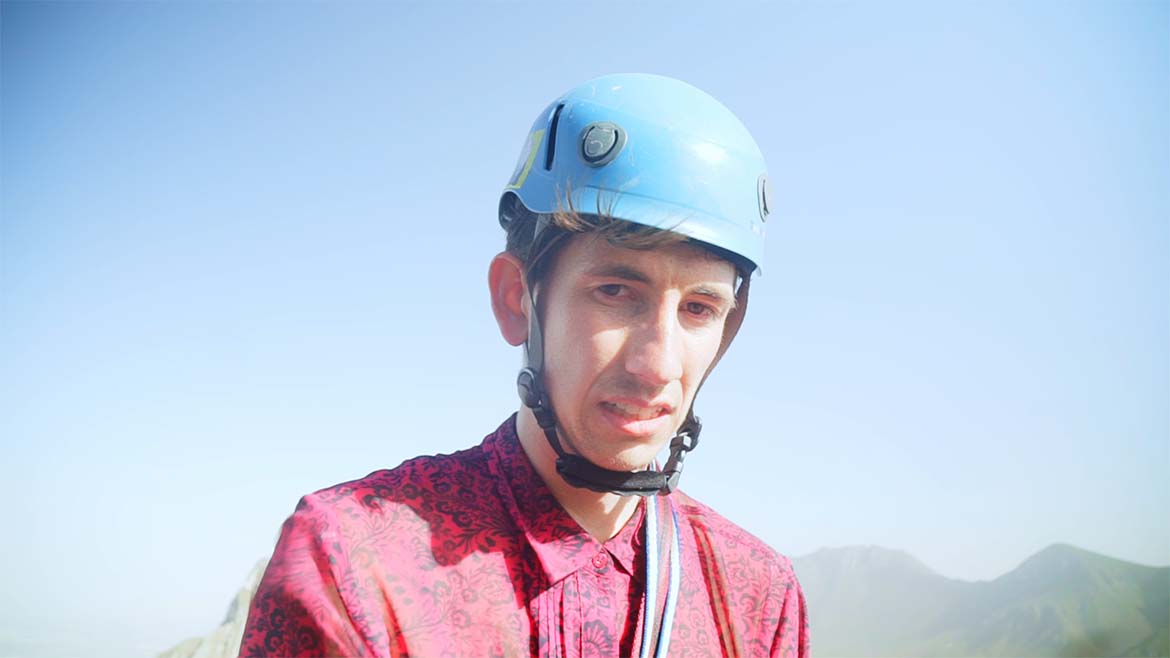 After some time to rest and eat snacks, he started to feel better. This climb had really pushed us to our limit, but here we were, we had done it.

The real emotions for me came as we neared the ground after four hours of rappelling into the night. Knowing we had made it down safely, I could finally relax and appreciate the monumental nature of what we had just accomplished. 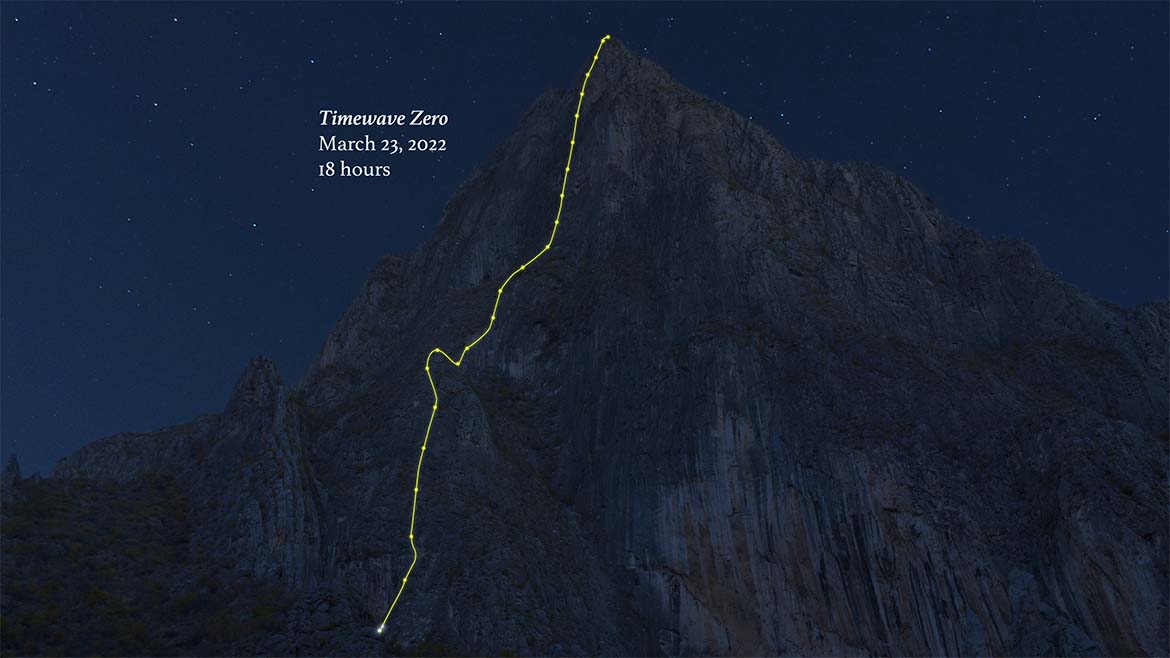 My feet wanted to die after being confined in tight rubber for 18 hours. I know you’re reading this on the Xtratuf website and you might think I’m forced to say this, but genuinely I felt I could have orgasmed from the relief I felt putting my deck boots back on at the bottom. We properly disposed of Jaidons “tortilla bag”, and got back to our casita around 10:30 p.m. where we almost instantly went to bed for one of those deep, dreamless nights of sleep. 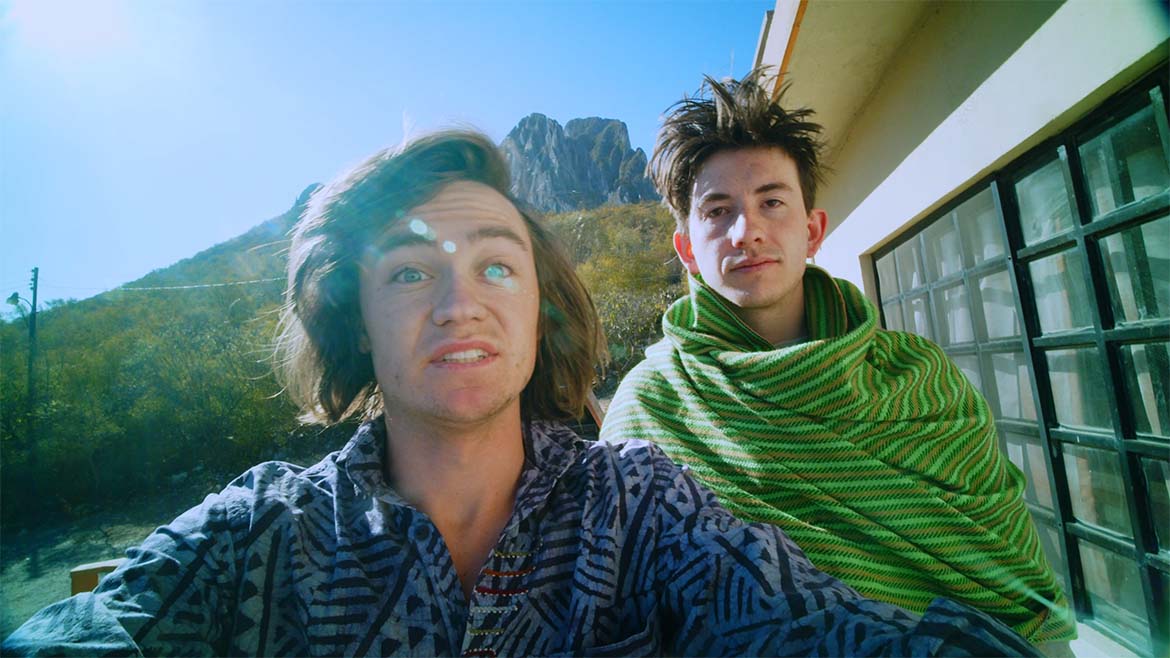 This is an accomplishment that I will be forever proud of. For us, as two tall lanky guys who have been collaborating and working together for over 6 years now, and who started climbing together, it was really special to share this moment. 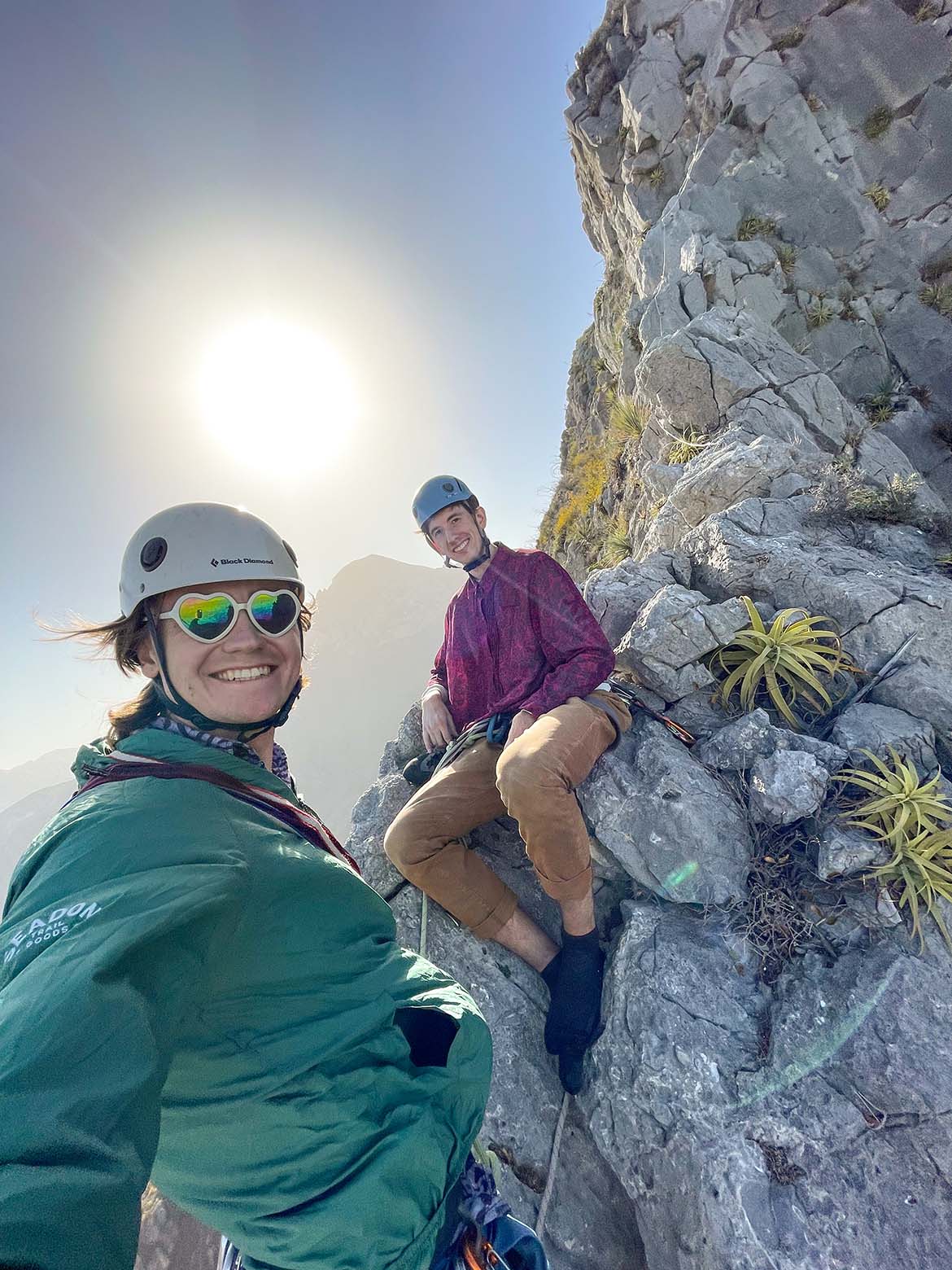